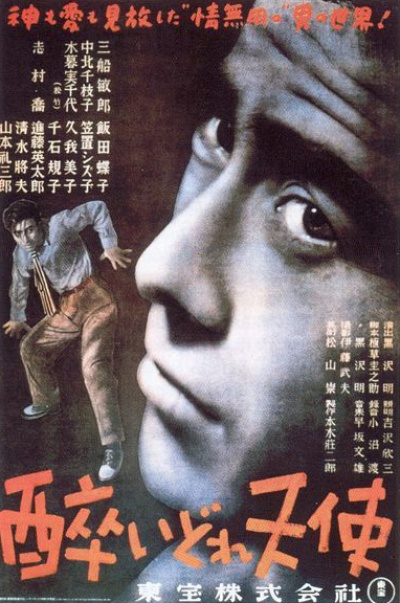 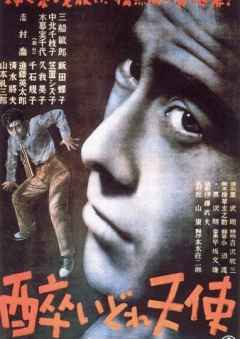 A young man calls at Dr. Sanada’s clinic saying he has got his hand smashed by a closing door. This man, Matsunaga by name, is an outlaw of the locality looking after the affairs of his boss in this black market region. Though simple-hearted and naive by nature, he is one of the young men who have lost their aim in life in the post-war confusion of the world around him. Actually he has got wounded by a bullet in his fight with other ruffians. Dr. Sanada, while telling the patient jokingly that he will charge high fees from nouveau riches, suspects that he is suffering from TB by the way he coughs. He advises Matsunaga to get an X-ray photo of his lungs, but the latter scorns at it and goes away, leaving the words “How can I be a TB patient?” A few days afterward Dr. Sanada hears about Matsunaga’s career at a drinking shop named Hisago which he frequents. After looking for Matsunaga’s whereabouts he finally gets him at a cabaret and earnestly admonishes him to receive medical treatment. The unusual enthusiasm with which Dr. Sanada treats Matsunaga strikes urse Miyo. Sanada feels that he finds in Matsunaga something which he shared in his youthful days of long ago. He mutters to himself that Matsunaga, though striving to show a mere bravado, must be feeling lonely and helpless at heart. One day, Dr. Sanada has an unexpected visit from Matsunaga, who says he has called just to beguile his tedious hours, being shut indoors by the rain. Dr. Sanada exhorts him to be more gentle and well-behaved, but the latter defies him in foul language. A few days later, Dr. Sanada encounters Dr. Takahama on a road. Takahama is one of Sanada’s class mates in the medical college and is the director of a prosperous hospital. Far from despising the poor lot of Dr. Sanada he holds this class mate of his in high esteem for his ability in curing TB. He tells Dr. Sanada that a TB patient named Matsunaga took X-ray photograph of his lungs at his hospital and that he advised the patient to receive medical treatment from Dr. Sanada. Hearing this Dr. Sanada calls on Matsunaga fearing about his condition. He advises Matsunaga to give up his show of Dutch courage and to follow the advice of an old man meekly. That evening Matsunaga calls at Dr. Sanada’s clinic under the influence of alcohol, and yields to the doctor’s advice to receive his treatment. Dr. Sanada strictly warns him against wine and women. Suddenly Okada has made his appearance in the black market. He has just been released from prison. He is a senior of Matsunaga and is none other than the arch-rascal who forsook Miyo. The guitar played by him sends forth weird melodies. Matsunaga begins to get conscious of his malady making a steady headway. Whether to chase away his warry or to cheer himself up he wanders about from the apartment where his mistress lives to drinking shops and around the black market. Matsunaga happens to meet with Okada, and reluctantly takes him to Hisago Restaurant. He breaks Dr. Sanada’s commandment and drinks. He then shows Okada round to a dance hall and introduces his mistress to be snatched away by Okada. Okada calls at Dr. Sanada’s clinic and demands him to return Miyo. Matsunaga who is recuperating in a room of Dr. Sanada’s house desperately intervenes and gets Okada go home. The doctor says that he will report the matter to the police and seek their help to clear this quarter of the bacillus-like gangsters. Matsunaga opposes it, saying that he will ask his boss, who is a man of good understanding, to use his influence on their behalf. Miyo on her part cries that if she returns to Okada everything will be settled. Dr. Sanada, after silencing the two, goes out to the police station. Matsunaga holds back Miyo who starts to follow the doctor and, trying her to a pillar, rushes out on his way to the house of his boss. There Matsunaga overhears what he has never expected. The voice said: “A man who has coughed out blood must be daredevil. Let’s make him risk his life.” It was the voice of his boss talking with Okada and others. Is this the way of the underworld? Matsunaga loses his head and totters into Hisago Restaurant. Madam Gin of Hisago secretly loves Matsunaga. The moment she beholds Matsunaga she is struck with sentimentalism and tells him that she would like to quit her present profession and make a living, working at the dairy farm of her uncle. Leaving Hisago Restaurant, Matsunaga snatches a flower from a nearby florist’s shop. The florist who hitherto has never protested but has watched it with a smile runs after Matsunaga and demands his payment. He says that from this day on this quarter is within Okada’s domain. Now Matsunaga has lost everything, his spirit, his health, his mistress and his domain. Tottering on, he has stolen into the apartments where Okada and Nanase live. A fierce fight between Matsunaga and Okada ensues. A few days afterward Gin, holding the ashes of the dead Matsunaga, is looking lonesomely at the pond. She is on her way to her native village. Gin and Dr. Sanada quietly and sorrowfully talk about Matsunaga. A little girl passes by. She has been a TB patient receiving medical treatment from De. Sanada. She looks very healthy and cheerful for she is now completely cured. Gin quickly walks away. Dr. Sanada says that reasoning power is a most essential medicine for man. Induced by the girl’s cheerfulness the doctor smiles for the first time in many months. The bright sun of the spring time seems to be aglow with hope. 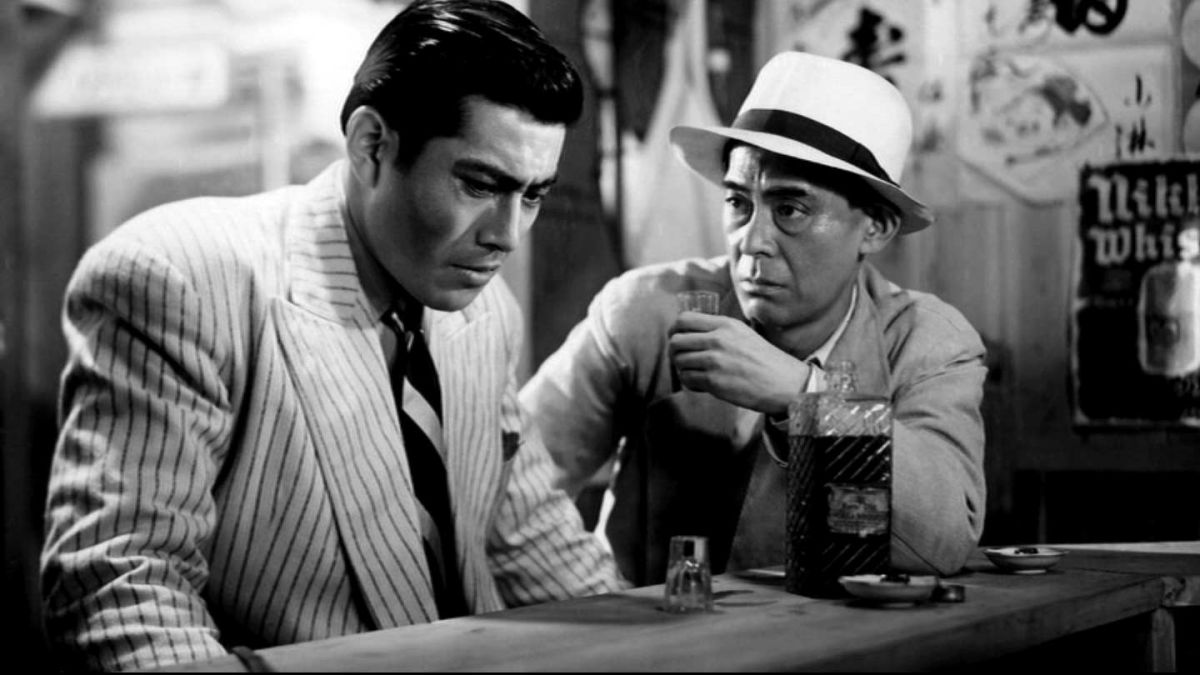 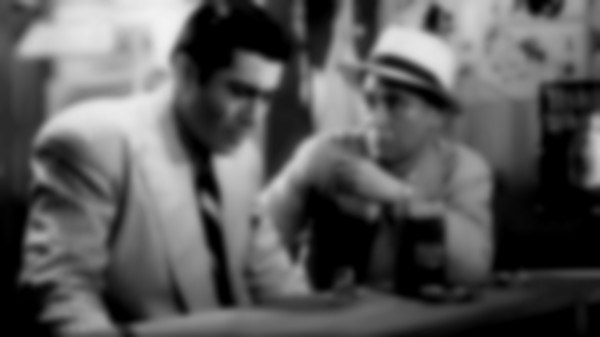